GOLD PRICES fell to new 2018 lows against a rising Dollar on Tuesday in London, hitting $1274 per ounce as President Trump threatened to hit back at China’s retaliation over last week’s new US trade tariffs with extra charges on another $200bn of Chinese imports.
Accused of “blackmail” by Beijing, Trump says these extra 10% tariffs will only come into force if China “refuses to change its practices.”
“The headlines gave gold a boost in Asia today,” says a trading note from Swiss refiners and finance group MKS Pamp, drawing “modest interest out of China.
“However the metal failed to extend further as offers [to sell around] $1283 restricted top-side gains.”
Global gold prices, typically quoted for London settlement, opened Tuesday morning some 1.3% below where Shanghai closed last Friday for the Dragon Boat holiday weekend.
Wholesale prices in the No.1 consumer nation fell by the same proportion today however, keeping a premium above London quotes of just $4.85 per ounce – barely changed from last week and still offering only half the usual incentive for new imports of gold bullion bars.
With few wedding dates now on Hindu calendars until the approach of November’s Diwali festival, India wholesale prices meantime held a $4 discount to London bullion on Tuesday, extending the weakest picture for demand versus supply since September last year in the No.2 consumer nation.
Wholesale gold prices in India have now traded at a discount for 5 weeks, despite global Dollar quotes retreating some $50 per ounce over that time. 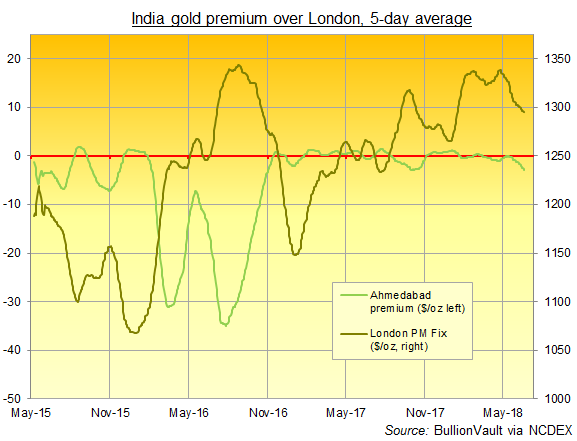 Jewelers in neighboring Dubai – visited by 2 million Indian nationals last year – are currently offering heavy discounts as part of a month-long ‘My Jewellery Festival’, with free gifts for shoppers also including gold bullion coins.
No.5 consumer nation Turkey today saw its Lira fall to 3-week lows on the FX market, just 2% above late-May’s fresh all-time record as the Government of President Recep Tayyip Erdoğan – standing for re-election in what could prove a close poll this weekend – hit back at fellow Nato member the United States for blocking the delivery of F-35 warplanes over Ankara’s decision to buy air-defense missiles from Russia.
Silver meantime tracked gold prices lower again on Tuesday, falling to 5-week Dollar lows at $16.25 per ounce.
Weakness in the Euro currency however held the white metal above €14 per ounce, a four-month high when reached in late May.
Gold priced in the Euro meantime spiked and fell back to €1103, barely changed for the week after dipping below €1100 on Monday for the 5th time in 4 weeks.
On the geopolitical front Tuesday, the US Pentagon confirmed it is suspending plans for ‘wargames’ with ally South Korea following last week’s historic meeting in Singapore between President Trump and North Korea dictator Kim Jong un.
Kim today was reported to be visiting Beijing for meetings with ally China.