GOLD PRICES fell back 0.7% after reclaiming last week’s closing level versus the Dollar once again in London lunchtime Thursday, dropping to $1170 per ounce as the US currency continued its post-Trump victory gains amid a surprise change in policy from the European Central Bank.
Central bank for the 19-nation Euro currency zone, the ECB left its key interest rates unchanged – including the 0.4% per year now charged, rather than paid, on commercial banks’ deposits with the Frankfurt-based authority – and extended its QE program from the previous March 2017 deadline as expected.
But now looking to December 2017 “or beyond as necessary”, the ECB will only create and spend €60 billion of new money per month, down from €80bn at present.
“Is that taper or not?” asked puzzled analysts, referring to the US Federal Reserve’s 2014 reduction of monthly QE creation and spending.
Looking at January’s inauguration of new US president Donald Trump meantime, “Exuberance will last into the first weeks of the new administration,” forecasts a new analysis from commodities and bullion market-maker ICBC Standard Bank today, “but expect animal spirits to run out of gas by mid-year.
“Fresh credit ratings agency concern is a possibility that is not yet being discussed,” it says, noting that “some Trump campaign proposals resemble the Bush-era tax bills – widespread personal rate and corporate tax cuts.
“Anticipation of reflationary fiscal measures may keep gold under pressure in Q1 but the debt ceiling and budget deficit will dominate headlines by H2 – that will recreate a gold-friendly environment.”
Arguments over raising the US government’s legal ‘debt ceiling’ limit on total borrowing saw Washington’s credit status downgraded from the top AAA rating for the first time in 70 years in August 2011, coinciding with gold’s surge to its current all-time record high above $1900 per ounce.
US federal debt was then revised up from “negative” to “stable” at one notch below triple-A by both the S&P and Moody’s ratings agencies in June 2013 – just as gold completed its worst quarterly price drop in 3 decades – and upgraded back to “AAA stable” by analysts at both Fitch and DBRS in spring 2014. 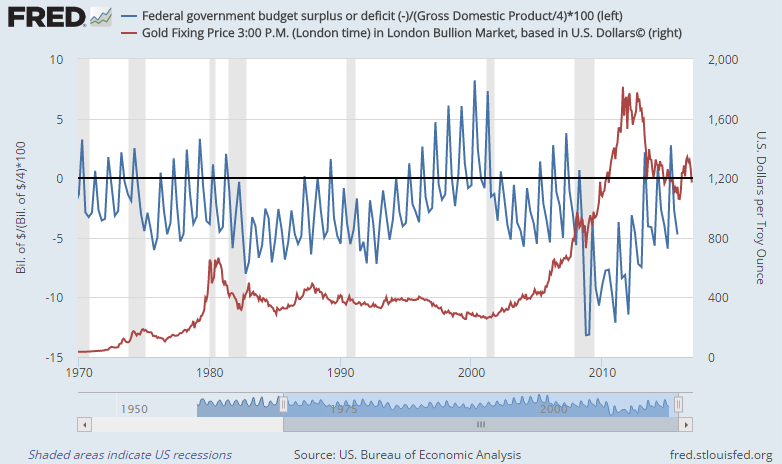 Looking meantime at interest rates ahead of next week’s US Federal Reserve decision, “what matters to US GDP growth [is that] the consumer is king,” ICBC Standard Bank goes on.
So with US bond yields rising sharply, “Q1 may be as good as it gets [for economic optimism, because] a continuation…would squeeze disposable income growth and pose a threat to mortgage lending and real estate activity.”
Led by longer-dated US Treasury yields, mortgage interest rates have surged since Trump’s victory, with the cost of 30-year home loans leaping from the summer’s near-record lows to more than 4.0% last week.
Facing “an uncomfortable year” ahead in 2017, the US Fed is “unlikely to get the opportunity to hike more than twice,” says ICBC Standard Bank.
Less than one-third of betting on Fed interest-rate futures for November 2017 currently sees more than 1 hike following next week’s near-certain rise to a ceiling of 0.75%.
Elsewhere, Bloomberg News reported overnight that global benchmark auction the LBMA Gold Price will now accept new and changed orders from so-called “indirect” participants.
With US-listed brokerage INTL FC Stone apparently the first non-member to do so on Monday, this means that clients of the 13 banks currently meeting online to try and identify the single price which clears the most business can now respond to the auction’s suggested price as it moves higher or lower.
This electronic auction’s century-old predecessor – the London Gold Fix, which the new process seeks to replicate – relied on client orders changing “in running” to balance supply and demand across the market.
The Fix ended in 2015 after its sister benchmark, the London Silver Fix, saw one of its 3 direct member participants, Deutsche Bank, quit the process amid allegations of “market abuse” across its commodities, interest rates and currencies divisions.
The London Silver Fixing Limited – the private business owned by the former auction’s direct members – is being sued in an “anti-trust” lawsuit in New York, a suit in which Deutsche Bank has already settled, sharing with the plaintiffs what their lawyers this week asserted is “smoking gun” evidence of conspiracy “with other large market makers…like…HSBC [and] UBS.”