GOLD PRICES rose to a 2-week high on Monday morning in London before easing back as the US Dollar extended its drop and world stock markets also slipped following the weekend’s change to the G20 group of nations’ stance on protectionist trade policy, writes Steffen Grosshauser at BullionVault.
Downing Street today announced that UK Prime Minister May will formally start the countdown to Brexit by triggering Article 50 on Wednesday next week, officially notifying the rump 27-nation European Union and setting a final exit deadline of 29 March 2019.
Moscow meantime ordered what several observers called an “unprecedented” rush to military exercises in the former Ukraine province of Crimea, from which the government of Poland again asked the Kremlin to withdraw, while the UK said 120 of its troops have joined the Nato deployment in Russian-neighbor Estonia.
Finance ministers meeting in the German town of Baden-Baden repeated their warnings over competitive currency devaluations to try and boost exports, but US pressure saw a clause on “free trade” cut from the summit’s communique, along with a clause on funding anti-climate change programes.
Apparently refusing to shake hands with German Chancellor Merkel’s hand at a press conference Friday, US President Trump is due to join his G20 counterparts at the next summit in July.
The US Dollar today hit a near 6-week low on the FX market after last week’s widely expected interest-rate rise by the Federal Reserve, only its third hike of the last 11 years.
Dollar gold prices hit $1235 per ounce, the highest level since 6 March, before steadying around $1232.
That was still over $35 above gold’s low before Fed chair Janet Yellen disappointed hopes for a strong rate-rise outlook in her post-FOMC press conference.
In the week preceding the Fed’s decision, new data said Friday, hedge funds and other ‘Managed Money’ traders cut their bullish betting on gold derivatives at the fastest pace since January 2016 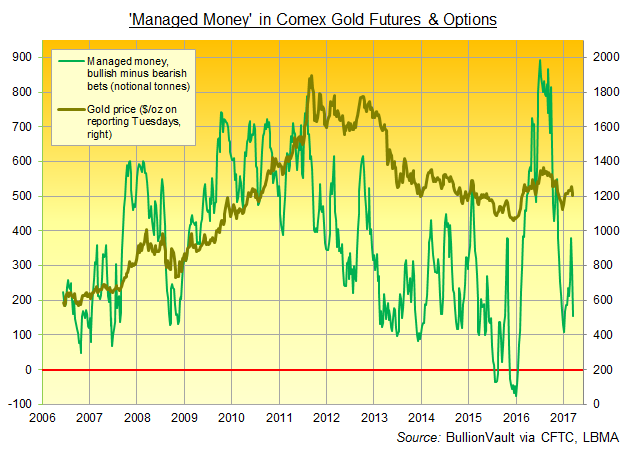 “With concerns of a more hawkish Fed now easing, the outlook for gold looks a little bit more positive,” according to a note from Australian ANZ bank.
Pegging resistance at $1237 per ounce, a further rise “could lead to a gain to $1243,” reckons Reuters technical analyst Wang Tao.
Meanwhile, Eurozone stock markets slumped from new 15-month highs on Monday, also pulled down by lower oil prices weighing on energy stocks and Deutsche Bank dropping over 4% as its Annual Report explained why the German financial giant needs to raise €8 billion to help overhaul its business structure.
The British Pound dropped to $1.23 on the Brexit Article 50 news, holding gold priced in Sterling up at £994 per ounce.
Having rallied 2% last week against the Dollar, silver again tracked gold prices and rose 6 cents to $17.46 per ounce, while platinum prices also added 0.4%.