BUY GOLD prices traded at 3-week highs and more against all major currencies outside the Japanese Yen on Thursday, rising despite new data showing the weakest 12-monthly gold demand since early 2010.
Global gold buying demand fell below 4,000 tonnes between October 2016 and September this year, with global gold mining output larger by almost one-tenth.
Western stock markets fell again, as did Western government bonds — pushing longer-term borrowing costs higher — while most industrial commodities held flat near their recent multi-year highs.
Trading up to $1287 per ounce, gold priced in Dollars moved 1.4% higher from last Friday’s finish, its lowest weekly close in 13.
Platinum prices also rose to fresh 3-week highs against the Dollar just shy of $940, but silver in contrast held 0.8% below Monday’s 3-week high of $17.25 per ounce,
July to September “was a tough quarter for gold demand,” said Alistair Hewitt, Head of Market Intelligence at the mining-backed World Gold Council today, reporting global demand to buy gold down 9% from the same quarter last year and the lowest quarterly total since Q3 2009.
Prices to buy gold averaged $180 per ounce less that quarter than they did in Q3 this year.
Contrasting with the first year-on-year growth in 11 calendar quarters for China’s gold buying, “India was coming to terms with GST [sales tax] and anti-money laundering regulations,” Hewitt explained.
“Although we saw ETF [trust-fund investment] inflows… they were significantly lower than last year.”
All told, the World Gold Council’s data show, global gold buying in the 12 months ending 30 September fell 11% from a year earlier, dropping below 4,000 tonnes for the first time since spring 2010.
Global gold mining output was 9.8% larger according to that same report. 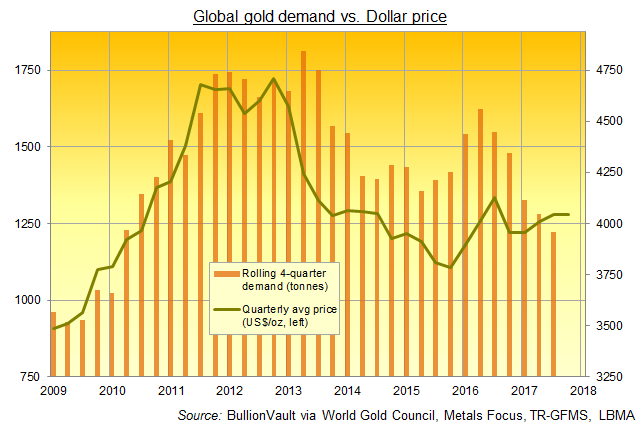 “Political risk from the North Korea threat and other issues have been supportive for gold,” says South African investment bank Investec, “but if underlying demand is weak and political risks recede then the metal could face a correction.”
Across the Middle East, gold demand in Iran rose again and Turkey’s private-investment buying almost tripled on a drop in Lira gold prices, says the World Gold Council’s report.
But next year’s addition of 5% sales tax in Saudi Arabia and the UAE means demand “is likely to falter” in the region’s key hubs, it goes on.
Equity markets across the Arabian Gulf ended Wednesday $7 billion lighter in market capitalization from before last weekend’s sudden purge and detention of political and royal rivals to new crown prince Mohammed Bin Salman.
“We want a vibrant trade relationship with China,” said US president Donald Trump after two hours of talks with Beijing leader Xi Jinping this morning.
“[But] we also want a fair and reciprocal one.”
With Brussels’ economists now forecasting that GDP growth in the UK will trail the rest of Europe as it exits the European Union in 2019, the EU’s chief negotiator Michel Barnier today gave London 3 weeks to confirm its “divorce settlement” offer or lose the opportunity to start post-Brexit trade talks next month as planned.
A poll of real estate surveyors today said house prices are falling across the UK, not just in London.
Hit by a wave of ministerial scandals, the UK Government meantime said it will extend £2 billion of trade credit to Saudi Aramco — the world’s largest oil business, which is now considering London’s stock market against New York, Tokyo and Hong Kong for a 2018 listing.
“A further lurch in descent to mercantilism,” said one former senior civil servant.