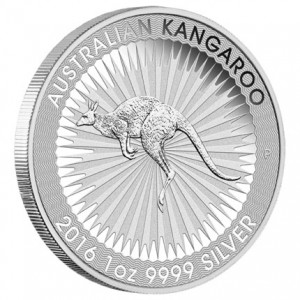 The Perth Mint is pleased to present the 2016 Australian Kangaroo 1oz Silver Bullion Coin for the first time.
The kangaroo is the largest marsupial surviving on earth today. The animal’s distinctive style of movement, hopping on its hind legs whilst using its large, muscular tail for balance, means it is one of the only animals which is unable to move backwards easily. A recognisable symbol of Australia, the kangaroo features in the Australian national emblem alongside the emu.
Struck by The Perth Mint from 1oz of 99.99% pure silver in bullion quality, the coin is issued as legal tender under the Australian Currency Act 1965 with an unlimited mintage.

AUTHENTICATION FEATURE
As a Perth Mint first, the coin includes an authentication feature on the reverse. In the form of a micro-laser engraved letter ‘A’ which is within the first A of AUSTRALIA, it is only detectable under a magnifying glass. The authentication feature is designed to make it significantly more difficult for the coin to be counterfeited providing peace of mind to our customers.

PRESENTATION
This bullion coin is presented without capsule in protective acrylic tubes of 25 coins. There are 10 tubes to a monster box.